Category C - Canadian medals, orders, decorations and other numismatic items not media of exchange
no exhibits

Category G - Junior exhibits by persons 16 years old but under 18 years of age
no exhibits. 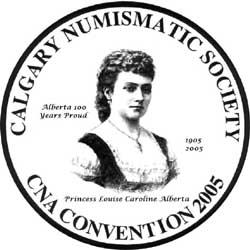 In 2005, the Province of Alberta celebrated its centennial year. The Calgary Numismatic Society was very proud to be the host of the C.N.A. Convention during this special year. To honour our Province, a medal design was selected to mark the occasion.

The obverse design of the medal features a beautiful portrait of HRH Princess Caroline Louise Alberta, chosen from the Alberta Provincial Archives. It also incorporates the convention slogan, "Alberta 100 Years Proud". The reverse will show the standard bilingual C.N.A. medal logo. As in previous years, this medal will be struck in limited quantities.

The portrait of the Princess is an appropriate choice, as she was instrumental in naming the Province. Born in 1848, Princess Caroline Louise Alberta was the fourth daughter of Queen Victoria and Prince Albert. In 1871, she married the Marquis of Lorne who was later appointed as the first Governor General of Canada. Although the Princess never visited Alberta, her husband did, and he was amazed by its natural beauty.

In 1905, Alberta became a Province, and it was suggested that this new province be named Louise after the Princess. She was very honoured, but insisted that the name should be her third name, Alberta, which would also honour the memory of her father, Albert, to whom she was devoted. In 2005, the medal committee decided that it would be most appropriate to honour our Province, and its namesake, with this beautiful medal design.