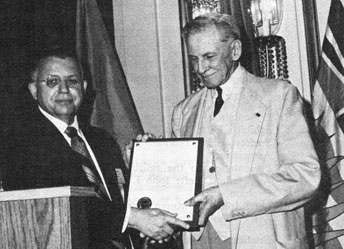 The Guy Potter Literary Award was established when the original C.N.A. Literary Award was renamed in 1978 to honour the memory of Guy R.L. Potter, one of the founders of the Canadian Numismatic Association. Mr. Potter served as Secretary and Bulletin Editor of the association from its beginning in 1950 until 1953 and as the third President of the C.N.A. from 1955 – 1956.

The Guy Potter Literary Award is given annually for the article chosen by the committee as the best original contribution, in that year, to The CN Journal. The selection is judged on the basis of literary style, numismatic worth, originality and general interest. An engraved plaque is given to the author of the winning article.

A TRIBUTE TO G.R.L. POTTER

G.R.L. Potter died in Ottawa on January 14, 1977 in his 84th year and Canada lost one of her most distinguished and highly respected numismatists. To many Canadians and Americans from coast to coast who knew him, he was a charming acquaintance. To those who knew him well, he was a staunch and valued friend. He was a gentleman of the old school and a numismatist of the old school. He was dignified and courtly in manner and at the same time warm and engaging in personality. For all of his long life he was an avid student and an omnivorous reader with the result that his knowledge of a wide range of subjects was almost encyclopedic. He was a lover of humourous stories and as a raconteur he was without equal.

His interest in coins and medals went far beyond "dated series" and "catalogue values". Unless a piece was beautiful or otherwise attractive or had an interesting story connected with it, it held little interest for him. He was seldom found without a few special peices in his pocket which could be used on the right occasion as conversation pieces.

Guy Potter was born in 1893 near Wrexham, North Wales, of predominantly English stock. He came to Canada in May, 1914. In August of that year World War I broke out, he immediately enlisted in the Canadian Army and went back to Europe in September of the same year. In March, 1915 he was invalided back to Canada and discharged in 1916 when he joined the Canadian civil service. In 1917 he re-enlisted for recruiting duty in the United States and served in Philadelphia until October, 1918, when he returned to Canada.

In 1919 he was asked by the U.S. Victory Loan campaign to speak on their behalf. He travelled in the eastern part of the United States as part of a speaking team and received a medal from German guns for his services. From 1919 to 1958 he worked in Ottawa in the civil service, first in the Department of Forestry and later in the Department of Mines and Technical Surveys. He retired from the civil service in 1958 and spent the remainder of his life in the pursuit of his many hobbies.

He was one of the original members of the Ottawa Coin Club serving as its first President from 1948 to 1950. He was also one of the founders of the Canadian Numismatic Association, serving as its first Secretary and Editor of its Bulletin from 1950 to 1953 and as President from 1955 to 1956. From 1959 to 1963 he served as a numismatic consultant to the Bank of Canada. He was Honorary President and an Honorary Life Member of the City of Ottawa Coin Club. In 1971 his services to Canadian numismatics were recognized when he received the gold medal of the J.D. Ferguson Award, the highest award of the Canadian Numismatic Association.