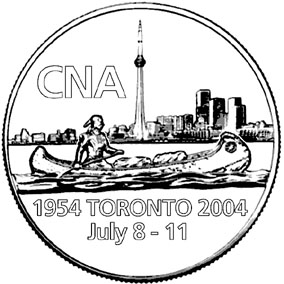 The J. Douglas Ferguson Award was established in 1969 and sponsored by Mr. Ferguson who, at the time, was Honorary President of the C.N.A. This annual award is presented to the living numismatist who has made the greatest contribution during the year to the advancement of numismatics in Canada by research, writing, publishing, or other means -- and who has not previously won the award. Mr. Ferguson set up an independent Board of Award with C.N.A. representation for the award administration. He made the selections for the 1969 and 1970 winners and determined that the board would choose the future winners from nominations made by C.N.A. members. Each year’s winner for this separately sponsored award is announced during that C.N.A. Convention. An award comes with a citation and the medal.

Each year the exhibits at the C.N.A. convention are judged by a panel of volunteers assembled by Tim Henderson, Chairman C.N.A. Awards & Medals Committee. The exhibit judged to be the “Best of Show” is awarded this prestigious designation.

The Best of Show Award winner was Dorte Brace for her display "Saints and Their Stories on Byzantine Coins".

The Guy Potter Literary Award was established when the original C.N.A. Literary Award was renamed in 1978 to honour the memory of Guy R.L. Potter, one of the founders of The Canadian Numismatic Association. Mr. Potter served as Secretary and C.N.A. Bulletin Editor of the association from its beginning in 1950 until 1953 and as the third President of the C.N.A. from 1955 – 1956.

The Guy Potter Literary Award is given annually for the article chosen by the committee as the best original contribution, in that year, to The Canadian Numismatic Journal. The selection is judged on the basis of literary style, numismatic worth, originality and general interest. An engraved plaque is given to the author of the winning article.

The Jerome H. Remick III Literary Award was established in 1995 and its sponsorship continues through a bequest by Mr. Remick who was an active member of the C.N.A. and a well-known author of numismatic articles. This award is given annually to the author of the best numismatic article published in a local Canadian coin club newsletter during the previous calendar year. The award process is administered by the RCNA and the nominations made by members are submitted to a panel of RCNA officials for judging. The award is an inscribed bronze medal, which is presented to the winning author during the following year's RCNA Convention.

The winner of the Best National-Regional Newsletter Award was the Canadian Paper Money Society Newsletter and its editor, Robert J Graham.

The winner of the Best Local Newsletter Award was the Mid-Island Coin Club Numismatic Journal of Nanaimo, B.C. and its editor, Wayne Jacobs.

The Louise Graham Memorial Club of the Year Award was established in 1986 to honour the memory of this member who was the C.N.A. General Secretary from 1954 until her retirement in 1971. The award is offered annually to RCNA member clubs entering a competition to acknowledge the club having made the most significant overall achievement on behalf of its members and of the hobby. Clubs entering this competition provide reports of their activities during the previous calendar year. These are judged on the basis of topics at meetings, originality of initiatives, educational and numismatic promotions, coin shows and consistency of meetings. A panel of judges announces its decision at the following year's RCNA Convention.

The Louise Graham Memorial Club of the Year Award recipient was the Windsor Coin Club.

The members awarded Fellow of the C.N.A. were George Fraser and Dan Gosling.

It is the C.N.A. President's prerogative to recognize supporters, whether individuals or corporations, for outstanding support of the Association. The special President's Awards consist of a special wall plaque or a uniface Convention medal, suitably engraved for the occasion. To give the presentation a large audience, they are presented either at the annual general membership meeting or at the Banquet, befitting the special occasion of the event. As is usually the case with all awards presented at the convention, the President’s Awards are not announced in advance.

The Royal Canadian Mint received a special appreciation plaque for its support over the years including C.N.A. membership promotions in its product mailings.

George Fraser received a special presentation plaque for his contributions to the hobby over the years.

James E. Charlton received a special presentation plaque for passing along his values and for serving as a mentor and for his tenets on what are the greatest things to remember.

Dan Gosling received a special appreciation award for his work on the C.N.A. website.

The Jean Bullen Award was established in 2004 as an annual presentation for the best exhibit of Canadian coins displayed by a member at the C.N.A. Convention. At her passing, Jean Bullen made a financial bequest to provide an award for the category she had favoured most - one in which her outstanding Canadian collection frequently took 1st place, and often advanced to win “Best of Show”. The C.N.A. Executive named the award in memory of Jean Bullen and to acknowledge her generous bequest. The prize is a portrait style silver medal, which is presented to the winning exhibitor during the Convention banquet.

Each year, The Canadian Numismatic Association strikes a limited quantity of official souvenir medals commemorating the annual convention. They struck in small quantities to assure they remain a very worthy collectible and contain the official RCNA logo on the obverse, while the reverse features appropriate convention information.