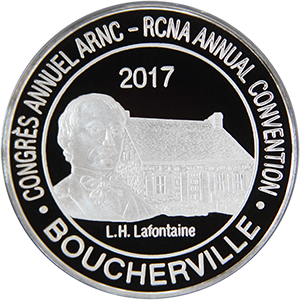 The 2017 official Convention Medal presents a portrait of Louis-Hippolyte Lafontaine and the house where he grew up in Boucherville, host city of the Convention. Two elements intimately linked with the history of Boucherville, Quebec, and Canada.

Louis-Hippolyte Lafontaine was born in Boucherville, Lower-Canada, October 4, 1807 (210 years ago). He was the third son of Antoine MÃ©nard, dit La Fontaine, carpenter, and of Marie-Josephte Fontaine, dit Bienvenue. Louis-Hippolyte was admitted to the bar in 1828. In 1830, he became active in politics, being elected Deputy for Terrebonne in the House of Assembly of Lower Canada. He married Adéle Bertholot on July 9, 1831.

In his political life Lafontaine proved to be a man of compromise during the tormented period of the rebellion of 1837 in Lower Canada.

He was appointed Prime Minister of Canada East between 1842 and 1843 and from 1848 to 1851, making him the first democratically elected head of a government anywhere in the colonies of world empires.

Appointed at the age of 34, Lafontaine was the youngest French-Canadian prime minister in history. He is known to have made the first speech in French in Parliament despite the adoption of the Act of Union, which prohibited its use. This civil disobedience was his first gesture as prime minister in 1842.

The mintages of the 2017 RCNA medal are as follows: