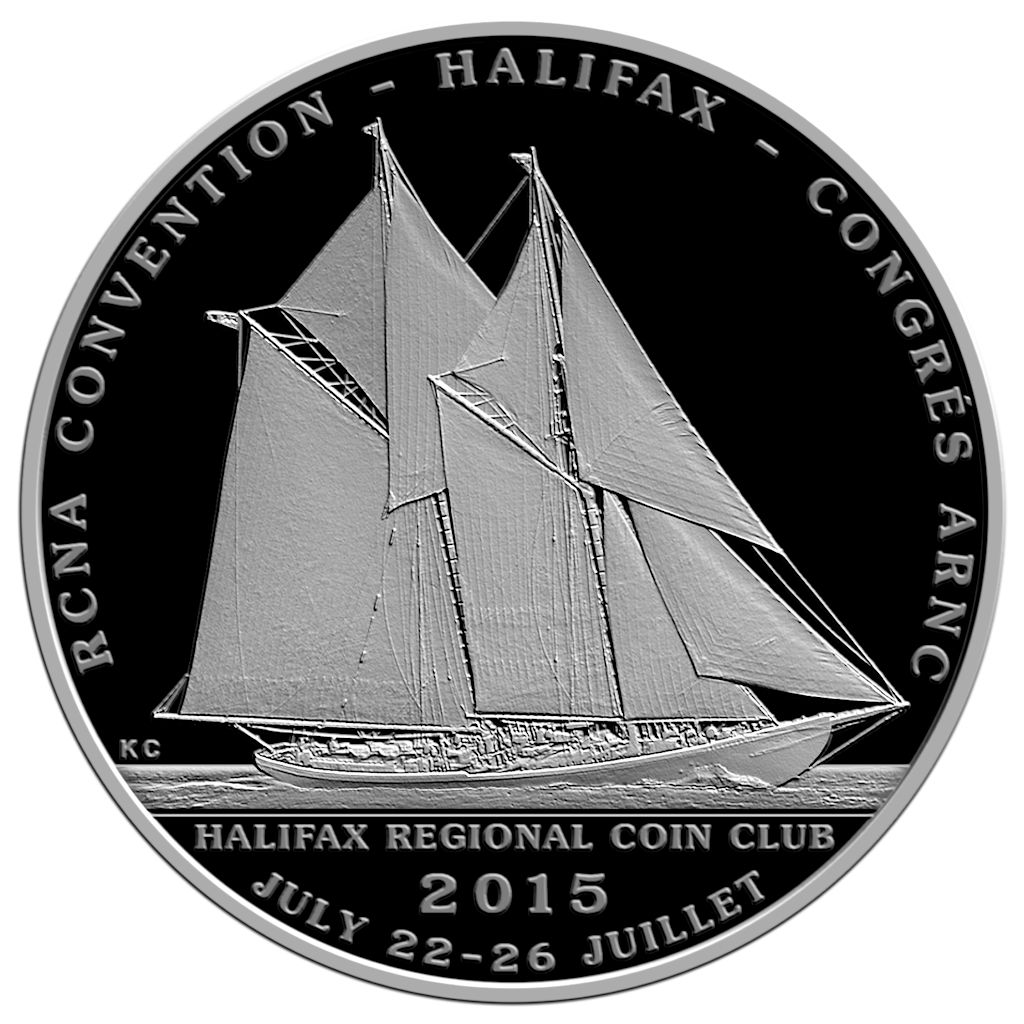 The 2015 RCNA medal design features the "Bluenose" schooner which is a significant symbol of Nova Scotia. This design was created by Ken Christopher, a member of the Halifax Regional Coin Club. Bluenose was a Canadian fishing and racing schooner from Nova Scotia built in 1921.Bluenose under command of Angus Walters became a provincial icon for Nova Scotia and an important Canadian symbol in the 1930's. She was commemorated by a replica Bluenose II in 1963.

Designed by William Roue and built by Smith and Rhuland, Bluenose was launched at Lunenburg, Nova Scotia on March 26, 1921 and christened by Audrey Marie Smith. She was built to be a racing ship and fishing vessel, in response to the defeat of the Nova Scotian Fishing Schooner Delawana by the Gloucester, Massachusetts fishing schooner Esperanto in 1920, in a race sponsored by The Halifax Herald Newspaper.

After a season fishing on the Grand Banks of Newfoundland under the command of Angus Walters, Bluenose defeated Elsie (out of Gloucester) returning the International Fisherman's Trophy to Nova Scotia. In 1930, off Gloucester, Massachusetts, she was defeated 2-0 in the inaugural Sir Thomas Lipton International Fishing Challenge by her most celebrated competitor, The Gertrude L. Thebaud. However, over the next seventeen years of racing, no challenger, American of Canadian, could wrest the International Fisherman's Trophy from her. Fishing schooners became obsolete during the 1930's, displaced by motor schooners and trawlers. Bluenose was sold to work as a freighter in the West Indies. Laden with bananas, she struck a coral reef off Haiti on Jan 28th, 1946. Wrecked beyond repair, with no loss of life, she was abandoned on the reef.

The Bluenose schooner has appeared on the reverse of the Canadian ten cent coin since 1937.

There is a bronze medal included in each pre-registration kit and extra bronze medals are available for $20.00 each.