The year was 1956 when Pat and Bunny Turner were transferred to Calgary for DuPont of Canada where Pat was employed. There they met Beth and Jack Marles at the Calgary Coin Club. They kindly taught Pat and Bunny how to grade Edward, George V, George VI and Elizabeth coins. 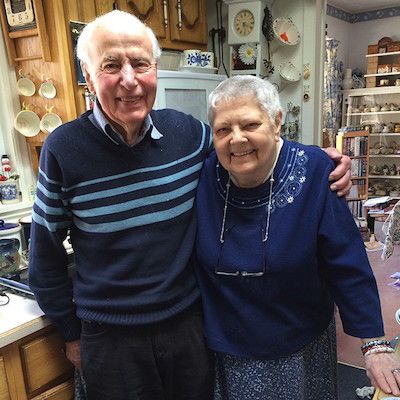 Within two years, Pat and Bunny were transferred back East (Montreal) and became active in the Montreal Coin Club where Bob and Sarah Verity were helpful to teach them even more about the study of coins and, particularly, the gold coins of Japan.

Subsequently, they moved to Pointe Claire, where Pat and Bunny started the Valois Coin and Stamp shop. It was located across from the Train Station, so people could stop in on their way home from work. Soon after, in 1960 they organized the Lakeshore Coin Club, where Pat and Bunny specialized in the teaching of the study of coins to young people.

The first President of the Lakeshore Coin Club was Bill Dunford and the first meeting was at the Unitarian Church. Subsequent meetings were at Stewart Hall, where they still meet to this day.

They were extremely fortunate that Fred Bowman, Honorary Vice President of the Canadian Numismatic Association, lived nearby, attended all of the meetings, and helped the juniors along the way. Fred, because he was a long time CNA member, knew many outstanding Numismatists and they were kind enough to do presentations to club members throughout the years.

Pat became very active in the Canadian Numismatic Association and joined in 1960. He served as the Quebec Director from 1967 to 1973 and became the 1st Vice President in 1973 for a two year term. He ran for the Presidency of the CNA 1975 when the annual convention was held in Calgary, but was defeated by Alec Munro. Pat became CNA Life Member #133 in 1976. He also served as Club Development Chairman (1969), Library Chairman (1973), Long Range Planning Committee Chairman (1975), Finance Chairman and other various portfolios. He was instrumental in assisting to guide the Canadian Numismatic Association for much of the 1960’s and 1970’s. Bunny, who joined the CNA in 1962 and member #4701, is a long time supporter of the association. Bunny was there with Pat at all of the CNA conventions during those years to assist wherever she could.

Currently, Pat and Bunny are active in the Nova Scotia chapter of the Canadian Tire Coupon Collectors Club and very much appreciate the honour of relating some of their history with the Royal Canadian Numismatic Association.